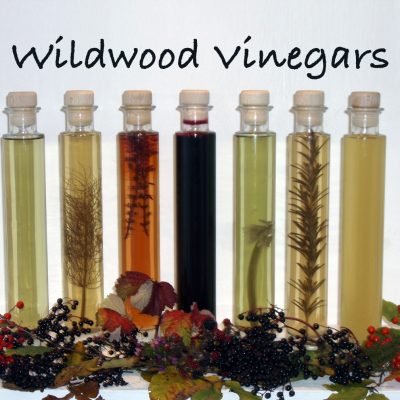 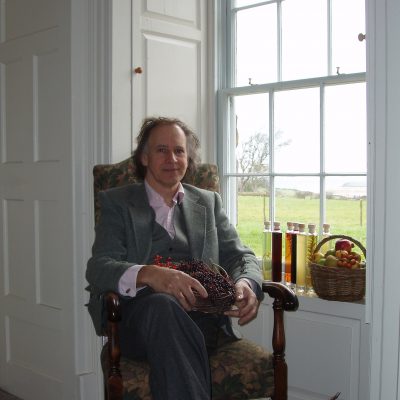 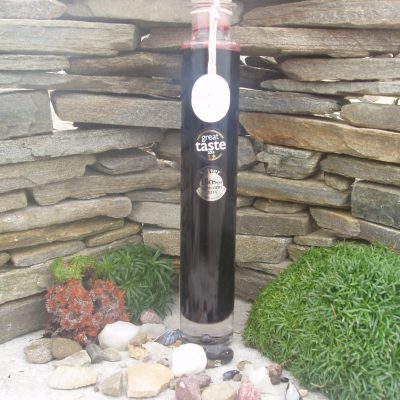 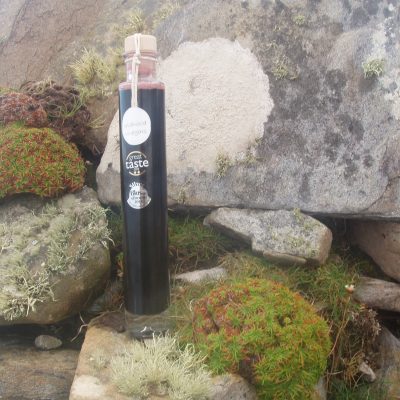 Fionntán Gogarty is the founder of Wildwood Vinegars, a unique artisan food company based in the little village of Rathlackin, near Ballina in County Mayo. His award-winning vinegar creations are unique, flavoursome and met with rapturous delight by increasing number of culinary fans in Ireland and abroad.

Fionntán has unique ethnic roots. “I am 1/4 Meath and 1/4 Italian-Sicilian, ¼ French, ¼ Donegal”, he says. The influence of grandmothers from both sides of his family can be found in Fionntán’s artisan vinegar creations. On the French side, his grandmother would have made wine at home as would be common to the region. They would have made their own vinegar too. On the Irish side, a Donegal grandmother’s love of berries jams would have secured Fionntán’s early awareness of the bounty of Ireland’s rural landscape. Inspired by his grandmothers and through his work, continues these age-old values, love and respect for nature.

An artist by profession, Fionntán Gogarty brings his keen aesthetic sense to his artisan creations. While he had been making vinegars all his life, it wasn’t until the recession hit that he considered turning his skill with making vinegars and passion for great flavours into a business. “No one was buying paintings, and so it because clear that it was easier to sell a €10 bottle of vinegar than a painting that costs €2,000”, he says.

In Ireland, we do not have the grapes, but we still can make a wine from anything. From the wines then I make a vinegar. Fionntán also keeps a garden where they grow the organic lavender, thyme, tarragon and sage which contribute to the flavours of Wild Wood Vinegars.
A particular delicacy is the wild mountain thyme vinegar which is foraged in the mountains of Nephin in Co. Mayo and in Cashel in Connemara. “We have to be careful not to overharvest it”, he says. Then there are the floral notes of heather blossom, gathered where it grows bountifully in the hills of Mayo, this has won the gold award (at taste of Donegal) then there is wild fuscia, plenty of that along the Wild Atlantic route. Other flavours include the Elderflower and Honeysuckle.

Along by the sea, Fionntán gathers the dulse and a wild cliff samphire which only grows in cracks in the rocks. This he combines with a wild fennel to make a vinegar.
The vinegar that is sold this year was made last year but some of the vinegars are allowed to age for longer. A speciality of Wild Wood Vinegars is the 5 year old aged balsamic blackberry and fig vinegar. “With the exception of November, December and January there’s always something to harvest to make a vinegar”, says Fionntán. “It all starts with the Wild Garlic and then there is seaweed until November, then the blossoms come in the elderflower, honeysuckle and fuscia..”

With my grandmother, nothing gets wasted. If you don’t eat one meal, it is served up in another way. The French don’t like to waste food. Similarly, the philosophy the lies behind the making of a vinegar follows the adage that nothing is wasted. In the homes of Provence, they would have an oak barrel which contain a vinegar “mother” and into this they would pour any dregs of the wine that are left over. This would then be turned into vinegar and so a family would never have to buy vinegar.

“Usually with the making of vinegars, the final product is pasteurised which means it can have a great culinary benefit but very little health benefit” Fionntán explains. The vinegars of Wild Wood are live and aged in oak barrels, which adds to their rich depth of flavour and their viscosity. “Anything you can make a wine from, I make a vinegar from” he says

One of the most popular wild Wood Vinegars is the blackberry and fig balsamic vinegar.“To turn a vinegar into a balsamic”, says Fionntán, “you return the leftover fruits from the wine making process or you add more vinegar. In Italy they take all the skins anything that was rejected and they cook it up. That is why the traditional balsamic vinegar is brown.”
For Wild Wood Vinegars, they take ten litres of blackberries and cook them until bubbling. Then they add this to twenty litres of blackberry vinegar. “I put it into an oak barrel and forget about it for five years” says Fionntán. Unlike standard vinegars, this gets the tannins of the oak as well. It can be used then across the culinary spectrum- as an accompaniment to strawberries breads and salads. If you are cooking meats, pan frying a steak for example, right at the end if you drizzle in enough vinegar to coat it you can have this wonderful balsamic flavour.

Spending many days in the beautiful Mayo landscape, Fionntán takes great joy in gathering the wild flowers, berries, seaweeds and herbs that become a part of his unique Wild Wood Vinegars. One of the loveliest aspects of this job is the harvesting, says Fionntán.”70% of what we are using comes from the wild. Later today, I’ll be down on the shore harvesting seaweed. Two weeks ago, I was harvesting gorse”.

Fionntán is looking over a Mayo beach by the wild atlantic. “It’s like the medditeranean” he says. “Beautiful blue skies and the colours of the atlantic. I don’t know what we did to deserve it, but we’re going to enjoy it!”

This balsamic is so stunning, I’m dreading finishing the bottle. We’d love to buy more if we could get it posted to the UK and try more flavours. There’s no way I can wait until Dublin Horse Show next year. 🙏🏻

Adds intense flavour to all dishes!

Barrel No. 2, Bottle No 58 bought last May while touring the West Coast with our fabulous guide Dee Harman. This is the second bottle that was carefully packed in my luggage. I do not want to see the bottom as I love this on salads. Wish it was available in the USA.